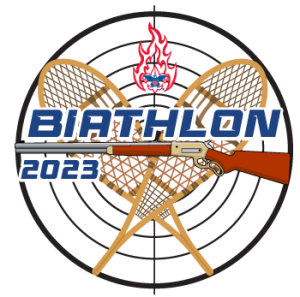 Biathlon "is rooted in the skiing traditions of Scandinavia, where early inhabitants revered the Norse god Ullr as both the ski god and the hunting god." Originally called “military patrol,” the sport was contested at the Winter Olympic Games in 1924 and became accepted as a regular Olympic sport in 1955. It is the only Olympic event in which the United States has never won a medal of any color, individual or relay, and either men’s or women’s.

Our biathlon competition is a race in which Scouts snowshoe around a cross-country trail system whose total distance is divided into two BB gun shooting rounds, first in the prone (lying down) position, the other offhand (standing). Each will be 5 shots.  10 seconds of extra time is added to the contestant's total time for missed targets. The contestant with the shortest total time wins.